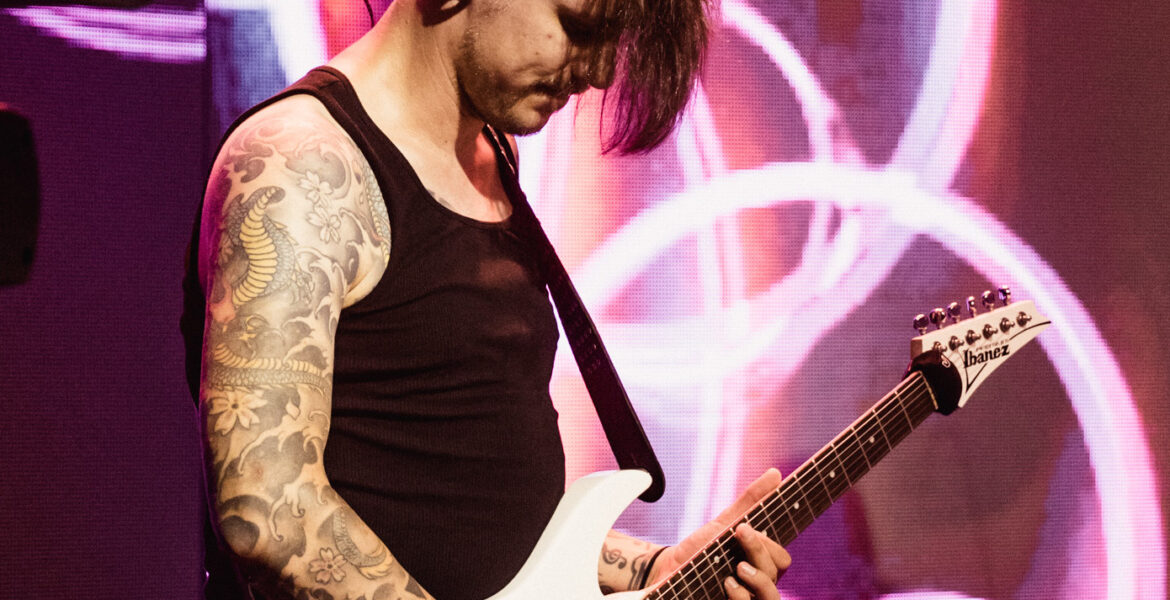 The internet is BIG.  So BIG.  I think that’s a good thing for guitarists.  There are so many great players in the world that aren’t household names that you can watch and learn from.  I can’t even imagine having this at my fingertips if I were a teenager learning to play guitar.  And I have been in the fortunate position to come in contact with many great players and nice folks because of the Kemper and my profiles.  One such nice human and great player is Nico Schliemann.  Thanks to Kemper and social media I have corresponded to Nico over the years and he was kind enough to share his story of people liking his tones and wanting to know if I was ok with sharing some of his MBritt-based tones.  I said, sure, if I can interview you for my artist spotlight so more people can be aware of you.  So here goes:

First of all, thank you for taking the time to talk to me about your tone journey.  I have followed you on social media a bit over the past few years seeing you onstage with some big acts over in Europe.  Since I’m in the USA I may not be familiar with some of the acts you play with but clearly they are some big shows.  What are your favorite styles of music to play, personally?

Oh, my favorite style is definitely in the pop / rock genre. I grew up with a lot of 80s rock and pop around our house, so that’s where my musical roots are. Through my studies of music I came across the whole funk / soul / RnB thing too, but my heart shines when it’s rock stuff.

It seems like the age of social media has given guitarists an enormous wealth of information on gear, technique, etc. that was un-heard of when I was growing up.  We seldom got to see guitar players unless they were on a TV show.  Now, there are hundreds of amazing guitarists all over the world who may not be familiar to the public at large but have huge online followings.  How do you feel the social media age has contributed to the talent level of guitarists?  Do you have any favorite (somewhat unknown) players?

Well I think the whole social media game has set the bar really high when it comes to chops and technique. I feel that sometimes it may even get a bit unhealthy, when you have the feeling of being “not as good“ as or “not as popular“ as player XYZ, but if you can see it from a healthy distance and don’t compare yourself to others all the time, there’s a lot of inspiration to draw from, watching other guitar players content (or other musicians in general).

I, too, was a bit of a gearhead over the years, having used every sort of rig imaginable.  Do you think that the new digital gear has finally “arrived” or do you think there is still a lot of room for improvement?

Well, to be honest, is there a so called destination called „arrived“ when we talk about gear? I don’t think so. Digital is so close to the real deal nowadays, if you don’t need the physical “amp in the room“ vibe, they are almost indistinguishable from real amps in a recording or live scenario. In the end it’s just a state of boredom with the gear we’ve been using for years, that makes us look at new (or old) stuff, revisit, change the pedalboard, change speakers, etc.

I’m sure there’s still some room to improve on the digital side, but I mean we’re literally talking the last few percent.

When you are playing live, do you incorporate pedals with your Kemper or is everything “in the box”?

I try to keep it as much “in the box” as I can. I use an external tuner with the Kemper, as I don’t like the internal one, but that’s just me. I’ve also used the Kemper as a clean platform with a small pedal board, which is also nice, but most of the time I want to keep it simple. This also streamlines the setup and eliminates possible errors like dying patch cables and so on.

Do you tend to create song-specific performances for live shows or do you use a basic bank or two like a traditional pedalboard setup?

Well both, it just depends on the gig. For a session or cover gig, I might just use 2-3 banks (two for electric and one for acoustic guitar). For touring purposes I usually program one performance per song, with all the tempos and effects dialed in for the songs, which makes it a no-brainer on stage, just going through the set list bank per bank.

Do you ever run into people who dismiss your Kemper rig or do you feel like it’s a proven industry standard by now?

Of course there are still people that don’t like Kemper setups or digital modeling gear in general, but honestly, I don’t care about that. My rig is not there to please anybody else but me, I have to play it and other peoples opinions about my rig are not relevant to me. And yes, I still love and use amps. As for the industry standard of the Kemper, I really think that it has a really good standing world wide on big stages and productions. Digital gear has a lot of benefits over classic amp setups, but in the end, it’s the player and the production that decide if it’s ok to use a loud amp rig or not. But that’s a whole other story.

What are some of your favorite amps/effects in the real world and are those some of the same ones you use in the Kemper?  Or do you have favorite Kemper profiles that are vastly different?

Real world pedals and amps I really love include my Strymon Timeline and Blue Sky, for drives I love my Analogman King Of Tone, Voodoolab Proctavia and my OKKO Diabolo Boost Monster (I have one of the really old hand painted ones). On the Kemper I almost exclusively use profiles for all the dirt tones with maybe the pure boost added for additional gain, I don’t use the built in Kemper drives that much, but that’s honestly just because I never felt the need to do so.

How do you feel the effects in the Kemper stack up with all of the new updates that have come out in recent years?

That made a huge step forward with the delays and reverbs, back in 2015/2016 I was in contact with Christoph (Kemper) and told him what I was missing with the verbs and delays, as I was switching to the Kemper coming from an Axe FX 2 at that time, and the effects on the Fractal were just amazing. So that’s where I made a complete list of stuff I would want in the delays especially and surprise, surprise… they were listening, not to take the credits alone, I guess there were more people „complaining“ about the old verbs and delays, but they changed it, which was a very big plus for me, as I do a lot with delays and ambient verbs.

Since I started using the Kemper almost 10 years ago, I feel that the Kemper community has grown immensely but there is still the feeling of community, especially on their website forum and social media pages.  Is that something that you follow?

I follow the German and English  Kemper groups on Facebook, Kemper on Instagram, and yeah, it’s a big community, that is very helpful. I’m not very active on the actual Kemper forum on their website, I can’t even tell you why, maybe just because the handling on Facebook is much easier, regarding comments and stuff.

Check out Nico on Social Media:

FREE PERFORMANCE!  Try out one of Nico’s favorite performances here:

Select the fields to be shown. Others will be hidden. Drag and drop to rearrange the order.
Click outside to hide the compare bar
Compare
Compare ×
Let's Compare! Continue shopping