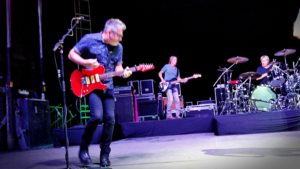 I'm Michael Britt and I play guitar for the country group Lonestar.  We’ve been together 26 years and have had 9 #1 songs and sold millions of albums over those years.  I grew up in Fort Worth, TX and started playing guitar in my teens. I went to college for a while before realizing I'd rather be playing music for a living and got that opportunity in 1990. 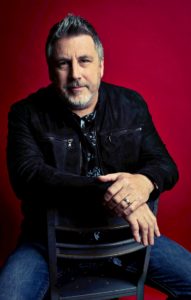 After a couple of years and a couple of bands, I moved to Nashville in 1992 and shortly after was called by friend who was starting a band that needed a guitar player.  Right place at the right time. We formed Texassee in 1993 and played bars all over the country and up into Canada before landing a record deal with BNA Records in 1995.  The rest, as they say, is history. We've made somewhere in the neighborhood of 15 albums and sold 10 million units and have had 9 #1 Country songs as well as a #1 on the Hot 100 Pop chart with “Amazed” in 2000. Over the past 22 years, I’ve gotten to work with many of the best musicians, writers, and producers in Nashville and I learned as much as I could.  I was so go green when we first got our deal that I certainly had a lot to learn.

Since then, I’ve spent years chasing tone and have been fortunate enough to have the luxury of being able to try and buy some of the best guitar gear in my quest to sound better.  I've been using the Kemper Profiling Amplifier onstage and in the studio since 2014 and have been extremely happy with what I am able to do with the Kemper. I have profiled my amp collection as well as any other amp I can get my hands on for a couple of hours and have compiled a bunch of my favorite profiles for others to use and make their own. Profiling amps is more of an art than an exact science and I've been lucky enough to have good buddies and a lot of great amps at my disposal to work with and to profile into the Kemper. I'm always trying to work on my playing and learn new things.  This often carries over into other arenas as I am also enjoying building and tweaking pedals as well. I also do rig consulting and custom profiling depending on my schedule. For more information, you can contact me at mike@mbrittprofiles.com.

I'm currently using a Kemper toaster on the road for my guitar sounds.  I use a Line 6 X2 or G90 wireless and go straight from there to the Kemper and out to foh via main XLR outs.  I send the monitor out of the Kemper to my signature ValveTrain Power Train 50 for a little stage volume and to act as a kind of sub to augment my in-ear monitors.  I'm a little old school (if that's even possible to say since I'm using a Kemper) so I'm used to hearing sound bounce around onstage and it feels eerily quiet when it's not there.  After taking years of auditory abuse, I try to be aware of excessive volume and high frequencies so I baffle the onstage cab so as not to maim my bandmates or myself. This keeps my guitar from killing the other guys onstage or hindering our foh engineer with excessive volume.  Or at least that is the aim. 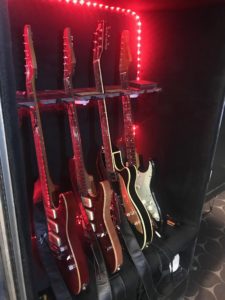 For guitars, my mainstays over the years have been Tom Anderson guitars. What I call #1 is a Hollow T Contour that I've used on countless recordings and it is the main guitar I tweak with and use to profile.  I don't use it as much onstage anymore, but it gets the most Kemper use. Onstage, my main guitar has been a Tom Anderson Cajun Red Cobra with 3 Seymour Duncan Antiquity P90's. It is truly a phenomenal guitar and I can use it on just about everything.  I usually use this guitar to play the Soundcloud clips for the profile packs. I now have a Suhr Standard Carved Top with 3 P90's that, along with the red Anderson, are my main live guitars. After those two, I have a lot of guitars I tend to rotate in and out including:  2018 Gibson ES-335 Traditional Black, Gibson Les Paul Collector's Choice #15 Greg Martin, Collings I35LC Candy Apple Red, 2 Xotic Strats and 1 Xotic Tele, and a Duesenberg Starplayer III. I'm usually trading and swapping so that stable changes over time a little bit, but my main Andersons, my Xotics, my CC Les Paul, and Collings are staying for quite a while. 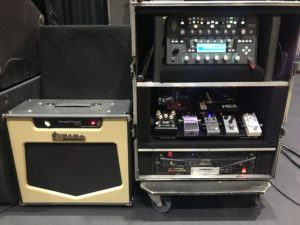 My main amp sounds that I use onstage come from profiles I've done of my own personal amps, primarily a modified 3P British Dream amp, Morgan RCA35, '67Pro Reverb, TopHat King Royale, and a '72 Marshall 50w.  For bigger lead sounds I mainly use my 72 Marshall 50w head that Dylana rebuilt after the Nashville flood of 2010. The transformers were ruined and many of the components and pots had to be replaced, so it's basically a brand new 72 Marshall and it sounds great.  I try out a lot of different profiles, but even after all of the amps that I've profiled I gravitate back to those amps because they just have “my sound.”

A lot of people wonder why I use the cabinet/speaker that I use for profiling. Over the years I've used any number of speaker cabs both live and in the studio, but when 3rd Power came out with their Switchback 212 cabinet, I was blown away. It's a deep cab, so it has healthy bass response. There are removable triangular ports in the back for open or closed back tones and each speaker has it's own resonant chamber with a diagonal wall to keep standing waves and resonant cab frequencies to a minimum.  What you end up with is a very even sounding cabinet with great frequency response and it doesn't impart as much cabinet sound to the amps you're using with it. All cabinets color the sound, but some cabinets color the amps so much that every amp sounds just like the cabinet. I can really hear the differences in the amps with this cabinet/speaker combination, especially with the back ports open.

For this year’s tour, I’ve started incorporating pedals in the loop of the Kemper.  I use a Voodoo Lab Hex loop switcher to add 6 pedals into the fx loop of the Kemper.  I have 3 gain pedals (Timmy, Rockett Majestic, Lovepedal Kalamazoo) as well as a Boss Dimension C chorus, Strymon Flint (for Harmonic Tremolo), and a tc Hall of Fame reverb for a ridiculously long 5-6 second reverb.  It makes a more complex rig as far as wiring, but it’s actually a dumbed down rig as most of the time I’m just using a single clean Morgan rig and using pedals and the built in Kemper fx to tailor effects for each song.  This makes 3-5 basic sounds from clean to solo tones and then just adding fx to taste for really consistent levels and tones in the p.a.